A collection of some of our chosen articles, tv appearances, newspaper articles and radio discussions.

Alicia Kalil from Berman-Kalil Housing Concepts, shared more on the pros and cons of building with shipping containers and if this trend of stacked steel boxes really is the future for building homes.

When young entrepreneur Lucas Steyn decided that he wanted a unique container home, he was surprised to find that there is now an entire company specialising in these once completely unheard-of structures.

On his family’s farm outside Bot River, Lucas has brought steel re-cycling and off-grid living together in this weekend getaway which he now rents out as a part of his own brand of eco-tourism.

Lucas, previously a night club owner, became obsessed with the idea of container living after seeing pictures of one, and he was one of the first to join the affordable and sustainable building rend.

When he realised the business potential of renting the space out he gave sold his nightclub and focused on his new venture fully, ensuring that it was as off the grid and environmentally conscious as possible. 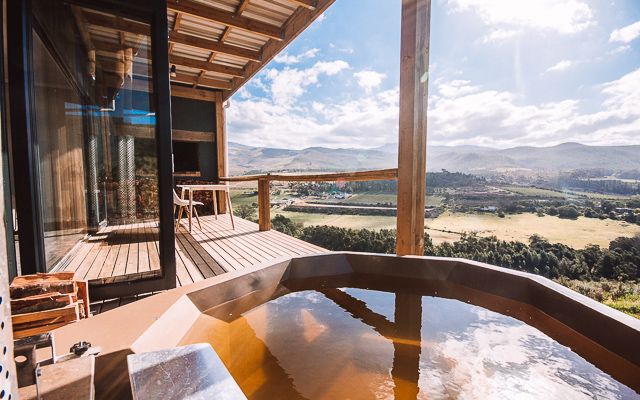 The walls were insulated with non-combustible mineral wool, clad in re-cyclable boarding and a plywood floor makes a base for laminated tiles, while the interior was designed to be chic and minimalist.

Lucas isn’t the only one who saw the potential in using container structures, entrepreneur Alicia Kalil of Berman- Kalil Housing saw the lack of infrastructure in South Africa along with the potential of turning containers into low-cost medical clinics, classrooms as well as homes. Together they were going to push the boundaries.

While the construction process was not without it’s own challenges, the final product is a gorgeous eco-friendly space that has been proving hugely popular, though the stunning location and mountain views certainly don’t hurt.

WATCH: Minimalist living is here and it starts with a container.  5 April 2019

Container homes are becoming the go-to solution for first-time homeowners. More cost effective and with a shorter lead time, it could be the answer to those trying to get a foot onto the property ladder.

But don’t go comparing these structures to the hideous looking steel containers you’ll find on the side of the road; container homes have grown up to become something to behold in the property market, something that screams “Hi, look at me!”

Listen to the show here

Alicia Kalil from Berman-Kalil Housing Concepts says that people are constantly pleasantly surprised when they see a shipping container home in person.

Speaking to Cape Talk recently, Kalil said that container living has several attracting forces, including build time, mobility and affordability. She said that 90% of the build is done at the factory, which is then taken to site.

Brad and Alicia chatted to Pippa Hudson about the container home revolution.

Listen to the show here

While the number of modular homes in South Africa is relatively small, Alicia Kalil from Berman-Kalil Housing Concepts says compared to when the company started out four and a half years ago, the movement has gained traction.

The second life of shipping containers

Brad Berman bought his first used shipping container in June 2014. It was dented and scratched, the paint was falling off and there were bits of rust scattered over the surface but its looks meant nothing to him. The Cape Town native and real estate developer was looking at the start of his new business.

Today, Berman is the co-founder of Berman-Kalil Housing Concepts, a Cape Town-based company utilising old shipping containers to build a variety of structures but primarily inexpensive high-quality sustainable housing. In South Africa, a nation with high unemployment and an abundance of informal settlement-type housing, Berman hopes to make a difference, and a profit.

“The potential number of uses for containers is so big in a place like South Africa. There are so many settlements in my country that could be replaced by these container homes. But the combination of quality, durability and price make containers ideal for housing but also clinics, schools, stores, almost any structure,” he says.

Cape Talk : Green Property: Why container homes may be the way forward

Kalil lists these reasons why choosing to live in a shipping contain may be the way forward:

Modular Containers can be used singularly, joined or stacked to get any size combination that is perfect for you.

Sustainability One can incorporate the our need for Sustainability into these products, with a range of options available to help save money while being kind to the environment

“The vast majority of our shipping containers come from shipping group Maersk, which has a large network of depots all over South Africa and abroad, as well as the ability to get the completed products to wherever their final destination may be.”

Recent FNB data shows that South Africans living in the country’s most populated provinces can expect to pay well over a R1 million rand for a home, leaving many with no option but to turn to expensive rentals or alternative living arrangements.

How we made it in Africa

South Africa suffers from a huge housing shortage. Despite the state building more than 2.6 million homes since 1994 under its Reconstruction and Development Programme (RDP), the housing backlog is estimated at around 2.3 million families.

For those who do not qualify for a government-subsidised house and cannot afford the loan of an entry-level home, very few options are available.

The company was launched last year by entrepreneurs Brad Berman and Alicia Kalil, and while the concept of converting containers into homes is not new, the founders argue that no one is doing it like them. For example, their homes are designed so that no one could ever tell that they were ever once shipping containers.